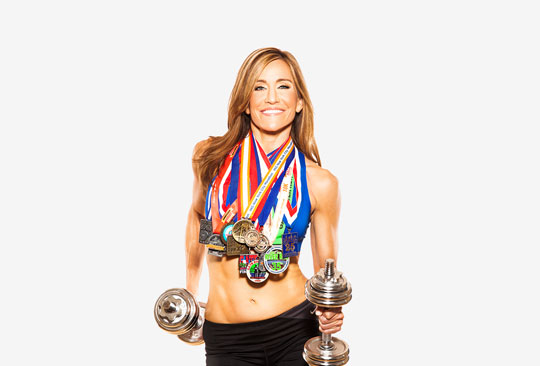 Fit at 50 and Smiling in the Sky with Beth Adair

Flight attendant and fitness model Beth Adair has been traversing the world from thousands of feet above the ground for over 25 years.

Early in her career, Beth put her health on the backburner, but quickly realized how much happier she felt once she invested time in her body, mind, and smile.

Beth was hired in 1992 – the last year flight attendants had a weight standard. To meet it, she significantly cut calories until rebounding when they removed the requirement six months later. “This lead to a weight of nearly 169. I knew I’d have to get my act together for my own satisfaction.”

At age 27, she started weight training and transformed her health. She’s so devoted that she fits in exercise whenever she can. Even on a 24-hour layover in Dusseldorf, she managed to run a dirt path along the Rhine River for an hour. Beth loves inspiring others to laugh. On a recent flight out of Amsterdam, she struck up a conversation with a Parisian visiting New York. The young student had plans for karaoke and needed a recommendation. Beth’s answer: Van Halen. “I later said goodbye when he got off the plane by calling him Van Halen. He laughed when he got off.”

Beth’s positive personality and devotion to health are why she sought out Smile Stylists to completely enhance her smile. She chose the practice because of research that made her confident her veneers would be done right.

“I had only had my veneers for a few weeks when I got a free ticket to the Wendy Williams Show for my 49th birthday,” she says. “I got to the set and one of the ladies running the audience placement asked if I had any questions for Wendy because, ‘We really need to do something with those teeth, your smile is perfect’.”

As a fitness model, one of Beth’s most memorable experiences was being published in Oxygen Magazine Australia for a two-page spread. She has just celebrated her 50th birthday in Ireland and will continue to showcase both her new smile and fit figure in photo shoots.